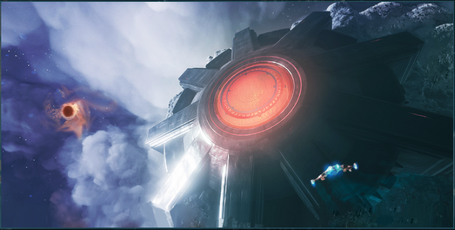 The image for the Ancients in the codex. An Ancient Warden can be seen on the left, with the top of an Ancient Warp Gate in focus.

Ancients are a mysterious ancient race and one of five factions in the Everspace universe that appear to consist of dark energy. Once a powerful and far-reaching empire several thousand years ago, all that remains is ruins - the Ancient Warp Gates. There are two types of Ancients encountered in the game - the Ancient Warden and Ancient Splitters.

There are only two types of Ancient enemies in the game. Their health works differently from any other enemy - they have no hull, with all of their health being shields. However, they do not regenerate shield hitpoints.

Some random zones and Ancient structures also have "splitter" Ancients spawned in (usually in groups of 1-3), which each split into three smaller versions of themselves once (instead of turning into a black hole, like the larger Ancients). Their attack is similar to Grey Goo in that it damages ships' hulls in an area of effect around itself, bypassing shields. They will continously chase and circle around their target until destroyed. If found in a zone with an Ancient Structure zone, killing them does not grant the ability to open the monolith in the center of an Ancient structure.

A Warden attacking a Colonial Sentinel.

With the Ancient Friends Glyph equipped, Splitter Ancients will occasionally assist the player in a fight. They will even attack neutral ships like Grady & Brunt Prospects ships and Traders, but they will only be aggro towards the ancients, not the player.

This type of Ancient is only found in sectors marked with the Ancient Depot icon, and there is only one in each. They are the guardians, or wardens, of the structure. They are difficult to fight, especially early game. They fire off homing projectiles, similar to the Thermo Gun but significantly deadlier. They will also occasionally fire a temporarily blinding white light, as well as occasionally teleporting around the area, but usually not too far from the player. Upon killing it, a red glow will surround the player's ship. This allows opening the monolith inside the ancient structure, revealing a Glyph (or dark matter/energy once all glyphs are unlocked) and it will activate the warp gate which is directly above the monolith.

For tips on destroying these tough enemies, see Tips and Tricks#Ancient Wardens.