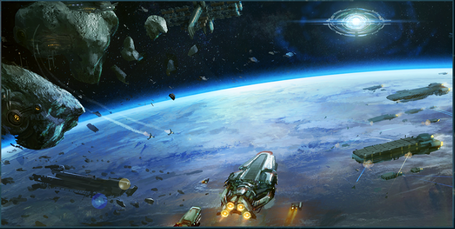 Cluster 34 or The Beltegrades is where the story of Everspace takes place, containing the territory of the indigenous Okkar species. More specifically, however, Hero traverses the Demilitarized Zone. So far, not much is known about Cluster 34 other than what is seen in the DMZ. It is home to the Okkar and several other Extraplanetary Lifeforms, as well as several independent factions. The destruction caused by the Colonial-Okkar war was not confined to the DMZ, so it is likely that there are many areas in the rest of the cluster littered with battle debris fields and derelicts. The cluster may also be home to the Horag (Elek's species) and the K'Nos (Throng's species).