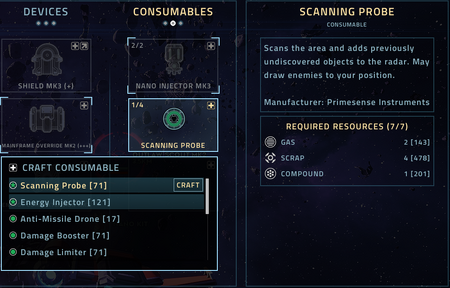 An example of the crafting UI in an older version of the game with a Scanning Probe.

Everspace has a crafting system which allows players to use various resources to craft and upgrade equipment, most of which are unlocked from blueprints. Blueprints randomly drop from destroying enemies and opening containers. Once picked up, the equipment the blueprint is for is unlocked immediately and permanently for the current run and all future runs. The blueprints for upgraded versions of equipment (mk2, mk3) can only be unlocked after unlocking the original. There are 183 unlockable blueprints.

Crafting is done by clicking the plus sign at the top right corner of an equipment slot, which will open a menu of craftable equipment with the currently available resources. Equipment that the player does not have enough resources to craft will be grayed out and will have a 0 on the right. That number indicates how many of that equipment currently craftable. Up to three of the player's most frequently crafted equipment in the current run will be at the top of the menu, highlighted and marked with a star.

Besides crafting entirely new equipment, most currently equipped primary weapons and devices can be upgraded with 3 (up to 4 with the Colonial Sentinel) modifications. These mods are the main use for crystals, requiring a significant number of them to craft. Once a mod slot has been filled it cannot be removed or replaced except with Mester Throng's removal or re-engineering services. Secondary weapons and consumables do not have any modification slots and can not be upgraded.

Equipment can also be salvaged, yielding 20% each of the two most common resources of the crafting recipe, rounded to the nearest whole number. If this does not result in a single resource, 1 scrap will always be given as a minimum.