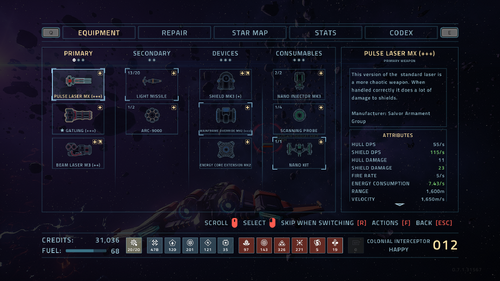 The Equipment UI in-game, showing many examples of equipment.

Equipment can be crafted using resources, found in containers, dropped from destroyed enemies, or bought from traders and Service Stations. There are 6 types of equipment: primary weapons, secondary weapons, devices, consumables, mods, and Enhancements.

Note: The Resources stated in the pages for each equipment type for crafting is without any level in the Crafting Costs Perk.

Each class of ship has three loadouts (A, B, and C) of equipment that are unlocked as the player progresses through sectors. See player ships for more information.

Additionally, the Bonus Equipment perk can be bought which allows choosing a few different options of random extra starting equipment.

Rarely, enhanced primary weapons and devices can be found, which are marked with a star and have random stat bonuses. When floating in space as loot, they are surrounded by a circular pattern similar to access keys. This is not to be confused with Enhancements, which are a different type of equipment and are explained below.

Eligible equipment can also be enhanced by Throng for viridian energy.

Primary weapons are the primary equipment at your disposal in Everspace. There is a total of 24 unique primary weapons, each with their own strengths and weaknesses. Use of primary weapons pulls from the ship's energy pool. Before they got their official names during development, all variants of the base-game weapons were named with numbers (Ex: Gatling II or Beam Laser II).

Devices are tools with unique effects which can be used to change to course of battle or to aid in exploration. Devices draw from the ship's energy pool by two different methods. Passive devices are always active but reserve a set pool of energy for as long as they are installed. Active devices use up an immediate burst of energy for each usage by the player. There are 30 unique devices, some of which have upgraded versions for a total of 84 devices.

There are 20 unique but 54 total active devices.

There are 10 unique but 30 total passive devices.

Consumables are powerful one-time use equipment. Despite this shortfall, consumables can mean the difference between life and death. Some consumables can be stocked up for several uses. There are 19 unique but 33 total consumables.

Primary Weapons and Devices can be upgraded in the inventory with modifications that upgrade some part of the equipment's stats, but usually with a negative effect as well. There are 15 unique but 34 total modifications.

Enhancements upgrade the player's ship with varying effects, often with a negative effect to balance out the positive. Some force or encourage varying or more unique playstyles. There are two types.

Currently, only the Scanning Probe has been removed from the game. Hull Enhancers are now known as Adaptive Armor.