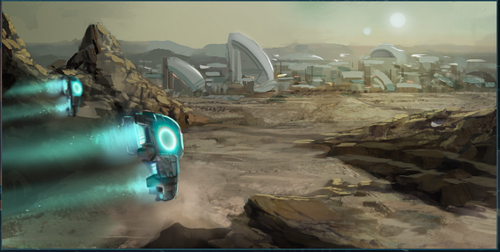 The image for the Okkar homeworld in the codex.

The Okkar are one of five Factions in the Everspace universe. They are a reptilian race with a long life span native to Cluster 34, where they have nine desert homeworlds, powered with Viridian Energy. Their society has a strict structure, using a caste system (assigning roles at birth), based on Tareen's history. Any who do not wish to conform with this system can choose to be exiled from their homeworlds. A war with the Colonials upon their arrival to the cluster caused the creation of the Demilitarized Zone and the immense destruction seen throughout the zone. They are automatically hostile towards the player (being a rogue Colonial element) and Outlaws, but are neutral with Grady & Brunt Prospects, which was part of the agreement between the two races.

The Okkar have no permanent structures in the DMZ unlike the Outlaws and G&B, but compensate with Corvettes and Frigates. Groups of ships are frequently found in each zone, with the occasional capital ships (frigates being fairly rare). There can also be random ambushes throughout sector zones. Tareen is an Okkar, but is not considered part of the faction.

If the player spends too much time in a sector (15 minutes on Easy difficulty, 8 on Normal, and 4-5 on Hard), three waves of Okkar ships will jump in and attempt to destroy the player, culminating in a fourth wave of Colonial Warships jumping in - unless Admiral Gorc has been defeated already. The waves of Okkar are usually very difficult to defeat without additional help, especially early-game. Ships destroyed that spawn in during these waves tend to drop little loot, but it can be useful to farm them for fuel.

There are several types of Okkar ships. They can be identified from a distance by their blue trails. Okkar ships have the strongest shields in the game compared to other factions.

Some images are concept art placeholders or are missing. Some information needs to be confirmed.