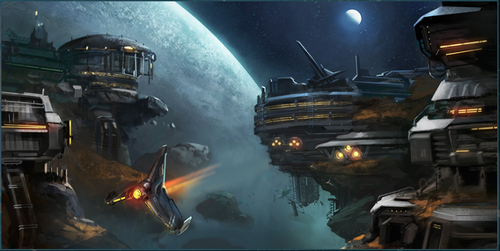 The image for the Outlaws in the Codex

The Outlaws are one of five factions in the Everspace universe. They are a loose affiliation of various clans (such as Elek's Coalition or the Phantom Retaliators) comprised of various unknown races, mainly humans. They are extremely frequent in the Demilitarized Zone and Cluster 34 as a result of the destruction left behind by the Colonial - Okkar war. They are automatically hostile towards the player, and are encountered in almost every zone of each sector.

Outlaws are found in mostly all zones attempting to raid G&B mining outposts, Traders, and Service Stations. Often, the player can find them already battling the local G&B forces and Okkar that are nearby upon jumping into a new system. Occasionally, the Outlaws will ambush the player in certain areas around a zone, but there is enough time to react before they fully jump in. Outlaw turrets can also be found on asteroids as a trap for unsuspecting ships, often near abandoned Colonial structures or derelict wrecks. Occasionally, large hollowed out asteroids will contain Outlaw structures. There are also Outlaw stations, usually with a jump suppressor or comm hub and drone servers/ship hangars, guarded by turrets. These may have been old Colonial or G&B derelicts that have been commandeered by the outlaws.

Outlaws are also the main enemy in the Sector 7 battles, except for the final story-oriented battle against Admiral Gorc.

There are several types of Outlaw ships. Most Outlaw ships can be identified by their orange/red trails, and typically have a stronger hull than similar Okkar ships.

Some images are concept art placeholders or are missing. Some information needs to be confirmed.