This page serves as a comprehensive guide to the main story of Everspace. It is fairly linear and tied to the player's progress through the sectors and the game - revealed through a few cutscenes, animated flashback videos, and the Codex. For a timeline of events with dates, see Timeline. 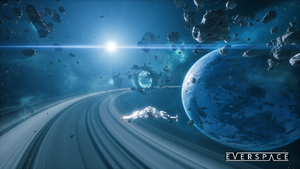 The events of Everspace take place in the Demilitarized Zone, established after the Colonial - Okkar war. It is still filled with debris from the war - derelict stations and various wrecks. As a result of the treaty that ended the war, active Colonials are a rare sight in the DMZ, but Grady & Brunt Prospects were allowed to continue their extensive mining operations. The Okkar fleet frequently patrols the DMZ, making sure the treaty is upheld and fighting the Outlaw clans that have infested the zone. To traverse the zone, the player travels in his ship using the ship's engine in addition to Jump Gates which were constructed all over the DMZ by G&B and the Colonial fleet to allow for more efficient and faster travel.

The date that the story begins is fairly conjectural, but it is confirmed to be sometime after 3056 C.E. (see Timeline), which is the most recent date found in the codex - Karlie Sharpe's lawsuit against G&B.

The main protagonist/playable character is known as Hero, a clone of Adam Roslin. 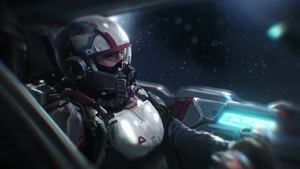 Adam Roslin in a fighter cockpit

The story begins with a confusing flashback - the main character has a dispute of some sort with an unknown person, he manages to escape in a fighter ship after being restrained and shot with something. Hero starts off with no idea of who he is or what he is supposed to be doing other than reaching a destination provided by his ship's AI, HIVE, who provides some instructions and training.

As Hero makes his way through Sector 1's jump gate to Sector 2 for the first time, he has another flashback where he sees 'himself' dying from a cytotoxin, then activating something and going into cryogenic sleep. After Hero mentions this to HIVE, the AI reveals that Hero is a clone - the AETERNA system which was meant to transfer only the skills of the original had malfunctioned and included the original's memories, but in a fragmented state. HIVE does not know anything about Hero's past, only the set of destination coordinates.

More memory fragments surface as Hero goes to Sector 3 - he remembers his original was Adam Roslin, a member of the Colonial Fleet. He also had a close friend back the Fleet Academy, Seth Nobu, who he saw in his first memory flashback. They were like a team, with Adam as the brains and Seth as the brawn, standing up for Adam. They were later deployed for war against the Okkar. Soon after, Seth tracks Hero down, believing he is Adam. Hero recognizes Seth, but Seth thinks he is pretending to have forgotten him. After a fight, Seth retreats and jumps out, promising that they'll meet again. While jumping to the next zone in the sector, Hero has another flashback which reveals more about the Colonial-Okkar war and Adam and Seth's role in it. They both were on the same carrier - Adam was a scientist cloning new troops, while Seth was an ace fighter pilot quickly earning badges. After the Armistice creating the DMZ, Adam and Seth went their separate ways. Adam complied with the fleet and the armistice, destroying the cloning program. Seth became an Outlaw, staying behind for the spoils and opportunities.

On the way to Sector 4, more is revealed in yet another flashback - Seth became a successful weapon's supplier in the DMZ. With a high demand for illegal clones, Seth found Adam once again, convincing his friend to strike a deal with him. But it is still unknown why Seth holds such a deep grudge against Adam now. After entering Sector 4 for the first time, a mystery helper arrives and gives Hero some supplies. She continues to randomly appear after this point, helping Hero with fights and giving him various supplies based on current needs. 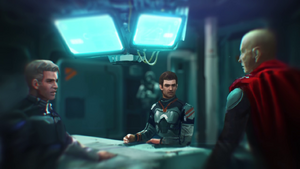 On the way to Sector 5, more of Hero's original memories surface. Seth and Adam's cloning venture was uncovered in a Colonial raid, and they were resigned to live out the rest of their lives in prison. However, the Colonial Fleet Admiral Crin Gorc offered them amnesty in return for them working on a secret project - decoding the Okkar genome. While continuing through Sector 5, Hero gets pulled out of hyperspace by webbers - controlled by Seth Nobu. Seth jumps in and scans Hero's fighter, discovering the coordinates and the fact that Hero is a clone. After that, Seth lets him go and even more memories resurface. Adam had successfully decrypted the Okkar genome with help from Seth's facilities, but the admiral wasn't done yet. He wanted to create a brigade of Okkar clones and start a new war with the Okkar, finally defeating them and gaining complete control over the cluster. Gorc offered them a part in his plans, which Seth readily accepted. Adam, however, did not want to restart the war and refused. Unfortunately for Adam, Gorc did not let him leave and forced him to comply with a cytotoxin.

In the next flashback right before getting to Sector 6 for the first time, Hero remembers was Adam forced to work or die in Gorc's laboratory. However, he made a bomb with some chemicals, destroying any progress he had made and blowing open the door, killing the guards stationed outside. Slowly dying from the cytotoxin, Adam escaped in a fighter from the hangar, and fled to a secret lab in the DMZ he had worked in before. After discussing the new memories with HIVE, they conclude their destination is the secret lab.

Right before jumping into Sector 7, Hero recollects Adam's arrival at the lab. To Adam's shock, the entire cloning facility was made unusable. He had little time, so he initiated an exploit protocol on a downed carrier in the DMZ to remotely bring it back online. He planned to have it clone himself as a body replacement, but he made mistakes due to the cytotoxin's fever. He awaits the body replacement in cryosleep. 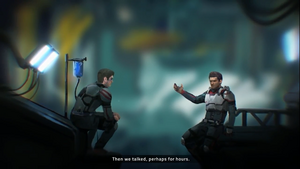 Adam talking to his clone

Hero arrives in Sector 7, a large asteroid with the secret lab, followed closely by the mystery helper, and with Seth Nobu arriving shortly after. The secret lab is encoded to Adam's (and his clone's) DNA, so anyone else would be unable to get in. They confront each other, with Seth declaring he is here for revenge and won't them stand in his way. Seth reveals the mystery helper to be none other than Denara Roslin, Adam's younger sister. Denara rushes towards Nobu while firing, but is unable to do much damage before her fighter is destroyed in an ambush and she is killed.

Hero fights off multiple waves of Seth's outlaw forces, and goes inside the lab. Now feeling like the memories he has are truly his, he finds Seth Nobu on the ground outside the entrance. He was mortally wounded by the defense system while trying to get in. With no other choice, Hero shoots him, and goes inside after having his DNA validated. The original Adam Roslin wakes from stasis, and they look at eachother for a while before talking for hours. Adam realized Hero was not just a body replacement, he was a thinking, feeling being. They both had limited lifespans - Adam due to the cytotoxin, and Hero due to the imperfections in the cloning sequencing. Adam instructed Hero on how to find eight missing DNA fragments from other Roslin clones and make himself complete. Adam finally succumbed to the cytotoxin, and Hero shot himself to get a fresh body, his new memories and experiences carrying over to subsequent clones.

Now in a fresh body, Hero expresses his desire to live a long life to HIVE, instead of the constant resets. They then move on to locate the first clone with a DNA fragment. Because of the clone's shocked reaction to seeing Hero, it is likely that this clone was active before Hero reset, and thus does not know he is a clone. All future clones Hero encounters have the same knowledge as him and aren't as surprised. After finally collecting all eight DNA fragments, Hero makes his way to the secret lab once more, and defeats the remaining outlaw scavengers there. He and HIVE succesfully repair the DNA sequence given to the clone factories, giving all future clones normal lifespans.

As Hero makes his way out of the lab, suddenly a colonial warship jumps in - revealed to be controlled by Admiral Gorc. Gorc is aware of the clones and is set on eliminating all of them, because they know who he is and what he has done. Luckily, there is an intact missile silo in the area with enough firepower to destroy the warship, which Hero utilizes to heavily damage it, while avoiding the warship's shields and thermal beam. During the battle, Gorc releases several fighters with Okkar clones - so he had succeeded in the first step of his plans despite Adam's sabotage. After four missile hits, Gorc's warship starts falling apart, the reactors going into meltdown. It, a large area of the asteroid, and the current iteration of Hero are destroyed in a massive explosion from the reactor.

With the DNA sequences repaired and Gorc dead, the Adam Roslin clones have full lifespans and are free to go wherever they wish. However, they still have to fight through the DMZ and make it to Sector 7 (now a huge crater) in order to go to neutral or colonial territory. From there, the clones disperse across Cluster 34 - going to random systems, inhabitable planets, and Colonial stations. Each of them does not take any action to stop the clone factories, so there is a presumably endless production of Adam Roslin clones now dispersing through the cluster, each with a full life span and HIVE unit. With the secret lab destroyed, it is impossible to remotely stop the process - they would have to find the cloning facility itself.